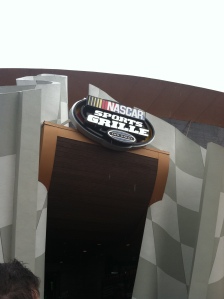 So there I was, with a friend at Universal Orlando CityWalk on a weekday afternoon looking to have a late lunch. We knew we wanted a decent meal for a reasonable price; reasonable for theme park food that is. After some though and eliminating places like Emeril’s, and the fan favorite Bubba Gump Shrimp Co, we finally landed at the NASCAR Sports Grille. Someone I know has been keeping up a steady drumbeat of calling NASCAR Sports Grille the best place to eat in CityWalk. After my afternoon meal there a couple of days ago, I think im going to have this persons eyes, taste buds, and brain checked for trauma. Now as always, my experience may not be the same as yours if and when you went to the NASCAR Sports Grille. This was a one time visit and the surrounding circumstances and events may be different if and when you visit this establishment.

Walking up we passed a model NASCAR stock car. This is always a favorite for fans, and a lot of kids’ first pictures when visiting the Universal Orlando Resort is in front of this car. The restaurants close location to the Universal Studios theme park is prime and convenient. Our visit is in the middle of July 4th week, a time that is generally the busiest time for theme parks and surrounding restaurants and shops. On top of that, on this particular afternoon the resort was being harassed by a strong storm front that was dropping a lot of rain. Usually during these strong storms theme park guests seek refuge in their hotel room or the closest shop or restaurant. So you can imagine my surprise when we walked into the NASCAR Sports Grille and saw only 20% of the tables being occupied by guests. Here we are, on an afternoon, in July 4th week, during a rain storm, and the restaurant is pretty much dead; not good! I would soon find out why.

After being greeted and seated by our hostess we find that there is a small television built into the side of our booth, and every other booth in the restaurant. At the time the television was on Nickelodeon and the popular Spongebob Squarepants show. I grabbed the remote that was sitting on the table and attempted it change to ESPN. I attempted to change the channel. The remote was dead and there were no buttons on the built in television. It’s a good thing the television wasn’t too loud. The last thing I would have wanted was Spongebob yelling in my ear singing the F-U-N song during my meal. Deciding that conversation was a better route to pursue I abandoned the television and broken remote. That was probably the better decision, lord knows the last thing I needed to see was clips on the midday SportsCenter of clips of the pervious days Nationals/Brewers game (zzzzz).

The restaurant was littered with NASCAR memorabilia. Various race car parts, autographed pictures and such were all over. Growing up in Indianapolis I was and still am a huge racing fan. But the layout of this place was too scattered and messy. It felt like the items were just placed anywhere there was space on the wall. It didn’t catch my interest and I didn’t feel the need to go out of my way to look at the props. When seating us the hostess told us our waiter would be right with us. So we waited, made small talk, and skimmed the menu. After a few minutes we realized that our waiter had not found our table yet. its not like the place was busy, but maybe he was in the bathroom or something ( Oh God, I hope he washed his hands….). After about 5 more minutes of waiting, which in restaurant time is almost forever when waiting just to get your drink order in, our waiter greeted us and quickly took our drink order? A few minutes later our drinks were on the table and we were ready to place our order. No appetizer for me but as soon as I opened the menu my eyes were quickly drawn to the chicken fried chicken option entree. This, a lightly breaded and fried chicken cutlet served with gravy, is a Hoosier favorite and this is the first time I have seen it on a restaurant menu since moving to Florida four years ago from Indiana. I quickly and proudly told our waiter my choice!

Maybe it was me who made the mistake. Maybe I ordered the wrong thing. Maybe I got my hope too high for this meal. At $15.99 for the entrée I was expecting something of quality and substance, but sadly, this was not it. When my meal arrived I was immediately alarmed. The chicken cutlet was over cooked, shriveled, and slightly burnt. The gravy came in a small ramekin. I knew exactly what I was in for, but I pushed on. After picking at a few of the average restaurant fries I poured the white gravy onto the chicken cutlet, cut a bite sized piece, and took a deep breath. What should have been a juicy moist fried cutlet turned out to be a dry, stringy, and hard to chew piece of meat. The gravy, however, was very tasty and made the act of eating the over cooked cutlet just barely tolerable.

More than that, the service left a lot to be desired. After I resigned myself to the fact that my meal would be less than stellar I began to make progress on my fries. It was then I noticed that there was no ketchup on our table, and since our waiter hadn’t passed by our table in some time I had to go hunting for my own bottle. Luckily, I found a bottle on the empty table behind us. After another 25 or so minutes of uncomfortable chewing, and no visit from our waiter, I threw in the towel. I managed to finish the cutlet and about half of the fries.

After finishing my friend and I waited for the waiter to show up with our checks. When he did, we handed him our Universal Orlando annual passes to apply our discount. When he arrived with the new, discounted check I placed my credit card in the bill fold and waited. After waiting a few minutes more for the waiter to pick up my card, again, remember the restaurant is practically empty, I decided to go visit the bathroom. I stood up, and looked around. It was then that I remember our hostess told us in a fleeting comment that the bathrooms were located on the second level of the restaurant; kind of odd, but ok. The bathrooms were upstairs and located next to an arcade area where visitors can play racing simulator games and other arcade favorites. The upstairs area was mostly empty except for a group of 5 or so high school students who were sitting at an empty table talking. They didn’t seem interested in the games and judging by the lack of warm bodies in the arcade area, no one else visiting the Universal Orlando Resort on this day cared either. 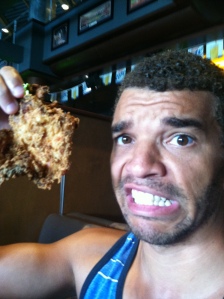 With a final bill of about $25 for food and tip I walked away from the NASCAR Sports Grille feeling as if I didn’t get my money worth. From the lack luster, over cooked food, to the lazy and uninterested service, I really think that this place has potential and they can do better. I hope that by the time of my next visit some changes are made. Judging by the lack of people in this restaurant on what should have been a very busy day, I’m not the only one who feels this way.

Or listen to the Wakefield Report Podcast Stitcher Smart Radio!

You can also listen to me each week on the Universal NOW podcast!